Beth and I spent the week of 10 June to 18 June (2002) in Sebastian in the Head Start program at the Service Center. We had a great trip, and worked our butts off. Unfortunately, we didn’t really get to do the whole Florida-Tourist thing, but with the weather being pretty stormy the whole trip, that wasn’t a great loss. Here’s a picture with me and our technician/mentor, Frank Ware. 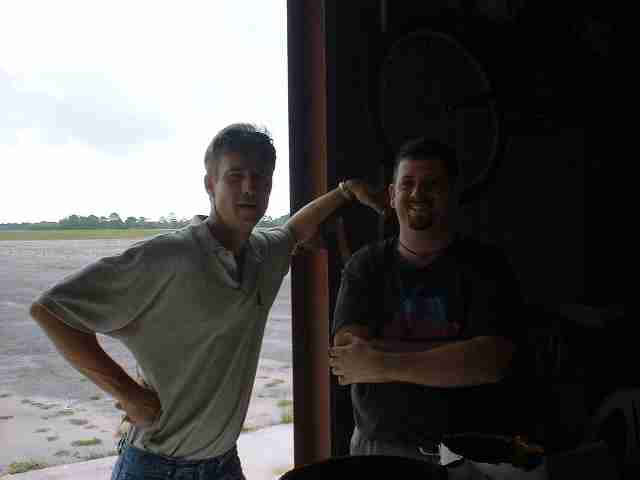 Frank was very knowledgeable, a great craftsman, hard worker, and all around good guy. Beth and I are both reasonably bright folks, but have limited shop skills, so it was great that he’d work with us without getting too frustrated.

We started out the week by taking inventory and pulling the doors off, and then immediately pulling out the pop-riveted keel and cutting holes in our pretty fast-build fuselage. Within minutes the speed brake cutout was made, then the canard “dog-house”, and oil cooler NACA intake. Frank seemed to take perverse pleasure in cutting thousands of dollars of glass off of the poor, immobile bird.

Next he started teaching us the basics on how these beautiful machines are put together. We learned how to lay the bidirectional cloth right away, by working on glassing the canard bulkhead. First you sand the target area (get prepared to know your sanding block intimately), create a radius with micro, and wet the lay-up area with epoxy, then lay the glass and stiple it to assure good epoxy penetration. Then we worked on some basic mechanical assemblies to finish out the day, laying out the control rod for the keel, and drilling through holes and bolting them together.

The successive work days became a bit of a blur. We cut out the inner skin on the fuselage and the speed brake for the hard points where the hinges and actuator will attach, and laid them up. Then we replaced the speed brake into the fuselage and laid triaxial cloth over the hole to repair the fuselage, putting peel ply around the edges to get good transitions. Then trim the keel to go over the newly created “Speed Brake bump”. We installed the keel control rod “mid-bearing support”, and assured good alignment at the back end, where the “whale tail” attaches. Once everything looked good, we put the keel back into the plane permanently with structural adhesive and clecoed it into place. When the adhesive had set we glassed the edges, and started doing the structural reinforcement layups inside of the keel for the nose gear. A big focus area for Frank was to get as much of our Triax work done as possible, as these structural layups are very important, and require the most finesse to get down correctly. We did get most of these, with the laying of the canard reinforcements, but will have a keel and all of the main spar layups to do at home.

In between the major layups we found time to place the battery tray and the landing light in with structural adhesive, and laid the oil cooler NACA in with schmooy (micro) and bid. The latter looking really nice once I sanded about 30% of it away. {grin} Then we started the canard work in earnest. We pulled it down and set it up on the fuselage, and started working with shims and the incidence jig to get it’s incidence set up properly. Once we had the shims were we wanted them, we hot glued them into place. Then we taped the underside of the canard to keep it from bonding and smeared schmooy all over the fuselage and canard bulkhead to create a “bed” for the canard, and replaced it on it’s shims.

While that was curing we coated the sump tank with Jeffco to seal it and worked on glassing the hard points for the fuel lines to it. Jeffco is a nasty smelling gray epoxy that you just keep smearing into the voids in the fiberglass. The hard points got the same schmooy treatment as the others, but with the added excitement that one set needed to curve around on of the tank sides. So, get out your trusty hammer and bench vise and whack away. Once it was in the approximate shape we really smeared it gooey flox to give the glass a nice transition area. Later we finished the sump by hand sanding the open end flat and Jeffco-ing it closed. Then we sanded the hard edge down and 2-bid the seal. The leak test was very successful with the tank holding air pressure all afternoon.

Also while the bed was curing, we started working on the elevators. I set the hinges up on the elevators, potted them on with structural adhesive, and riveted them down. Then I came back and drilled the bolt holes and attached the nuts through the inside of elevator tube with a magic wrench developed by Velocity. I’ll warn the potential builders our there that this operation is better suited to a circus side show act than a hobbyist, but once you get the hang of it is completely doable (just try and not curse too much that fix 30 minutes). Once the canard bed was cured, we pulled the canard and set the elevators up on it in the neutral position and cut the hinge slots, and potted them in with schmooy.

Next we cut out holes for, and set main (or center section) spar in the fuselage. It would have been nice to be able to set this in place now, but then it would never have fit into the delivery truck. Consequently we shimmed and aligned and marked it in order to place it once we got home, and then pulled it back out. This will be the first order of business once the plane shows up in Ohio.

There are millions of things to do on a plane, and the rudder pedals are but one. However, during our unsupervised “weekend of work”, this was one of the pieces of homework that Frank gave us. It’s also a good example of the many things that are important, but that you would not think of the first time. We were instructed to put the two bearing blocks as far outboard on the tube as possible to eliminate any future side-to-side motion of the assembly. This is a whole understandable thing, and a very good idea TM that wouldn’t immediately strike you, and is not mentioned in the manual. I’m very pleased with how this came out.

Another piece of business that we were left with over the weekend is the engine NACA scoops on the fuselage roof. These were already traced out for us, but wanting them to fit tightly, the fact that the cut-out crossed two planes (the roof and the firewall), the fact that the firewall is hard to cut (being virgin plywood covered in thick fiberglass), and our inherent reluctance to cut the plane made for a long, asymptotically approaching set of saw cuts that left bystanders wondering if we’d lost our minds. However, the finished product is quite satisfying, and I assure everyone that the next time I build a plane it will go much faster.

To finish out our week in Florida, we set the nose gear in permanently and connected the elevator’s concentric torque tubes and the center hinge. All in all we got 90% of what we told that we could get done complete, and though we worked very hard actually had a nice stay. I’d like to thank here, all of the fine folks at Velocity for their collective hospitality (Scott S, Scott B, Rhonda, Melanie, Duane, Bonnie, Natalie, Traviss, Brendon, Nathan, Mike, and most of all Frank) our new friends Dean Hoy and John and Rose Ward(?), and the folks at the Davis House. We had a nice stay in great part because folks were glad that we were there, and we appreciate it.