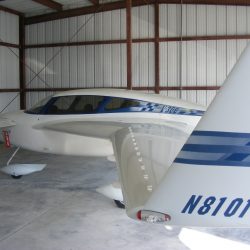 The engine quit during cruise flight, at 6500 feet, while the pilot was operating vfr on top. After descending below the clouds he observed swampy terrain and the savannah river. The airplane was landed in the river and incurred substantial damage. The pilot was recovered by a coast guard helicopter. Subsequent examination of the engine […]

During cruise flt, aprx 17 inches of one prop blade separated. During the emergency descent for a forced landing, the acft collided with trees then the water. Exam of the prop revealed that the fwd hub which contacts the fwd mounting flange was burned. A prop spinner was not installed. It had been removed before […] 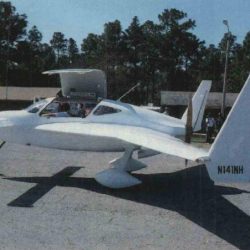 Neil was previously the pilot in this accident.  Neil’s Velocity was the first kit-built Velocity, and was featured in the July 1987 issue of Sport Aviation.  They also later covered his crash in the December 1992 edition (page 5). The homebuilt velocity & a boeing 727 were both operating in the tca in vmc with […] 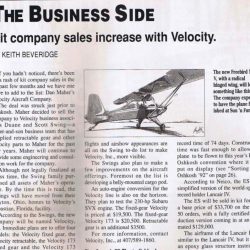 Repint of the December 1992 edtion of Kitplanes on the sale of the Velocity Aircraft company. Download