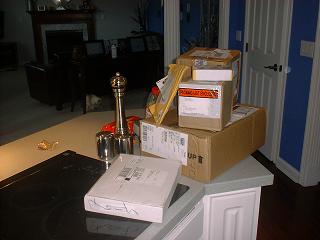 It’s Christmas in August! Yes, our Oshkosh purchases began arriving en masse today. As we’re working on nearly as many Velocitys as the factory, Ken has taken to sending our shipments to “Velocity North”. Thanks for the shout-out, Ken. I ordered a new (full) set of wing bolts, though there’s nearly no chance they needed to be changed, it clears the mind wonderfully. Also, we got the cast AL toe pedals and the “new” XL nose wheel. The new wheel looks faster, but I mainly bought it because it’s supposed to be easier to balance. The Reiff engine preheat system also arrived this week, which will be nice as fall sets in. The new pedals are installed, as are the SS flex lines to the brakes to replace the nylaflow, and the brake fluid reservoir has been moved to just below the nose cover for easy access. And Jerry machined us some new, ultra swank main gear pant standoffs. Way overkill here, but they fit very nicely, are shiny with no rough edges, and have multiple cotter pin holes for easy insertion. Nice.