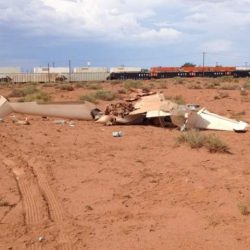 Apparently tried to takeoff with a rough-running engine and either ran off the end, or couldn’t get out of ground effect. | FAA | NTSB initial | NTSB factual | NTSB probable cause | News | On July 11, 2012, about 1240 mountain standard time (MST), an experimental Bunch-Cozy Canard III, N718JT, impacted terrain during takeoff at Winslow, Arizona. […]

The aircraft was in cruise when the pilot said the engine began surging. He attempted to rectify the problem by adjusting mixture, magnetos, and the secondary electric fuel pump, without success. As the pilot was looking for a precautionary landing area, the engine quit. The airplane crashed into some small scrub oaks during the forced […]