For local reference – from Kitplanes July 2008 and Sam’s N399SB website. (Installing an APRS Tracker in N399SB)

Since our APRS beacons are ported to the internet via receiving stations known as iGates, some APRS’ers have asked about the hardware and software requirements of setting up their own iGate. It is kinda cool to see where the packets from your own tracker have ported through your own iGate and out to the internet. An iGate is a great option for an aviator that routinely flies in a local area with a sparse iGate population. But even if your local area has lots of repeaters, the addition of an iGate only enhances the quality of APRS coverage.

An iGate doesn’t require a lot of expense, just some sort of receiver, your computer with a broadband connection and soundcard, some free software, and an antenna. Put everything together and get the software sorted out, and not only will you be able to see your aircraft tracker on the internet, but also your home-based iGate!

If you are reading this article when my iGate is running, you can hit this link to see it on the map. Look for the white iGate diamond, KJ4CKK, at Athens, AL.

Here is my iGate station: 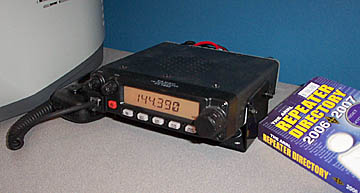 A Yaesu FT-1802 2-meter mobile radio feeds audio into the sound card of my desktop. The mobile radio is powered by one of the old batteries out of the RV-6 which is keep charged by a wall wart Battery Tender. Since the radio only receives as an iGate, there is practically no current draw or heat produced.

The sound card (actually the computer’s onboard sound card) serves as the packet modem for decoding the incoming beacons. However, any receiver that will pick up 144.39 will work (shortwave radio, scanner, handheld, etc). You just need a patch cable from the “speaker out” of the radio to “line in” on your sound card.

Software is UIView32, AGWPE, and Street Atlas. Here are some links:

Street Atlas is used for mapping in UIView. Mapping isn’t necessary just for feeding packets into the iGate but it does display the location of received stations. All this will start making sense as you work your way through the links. 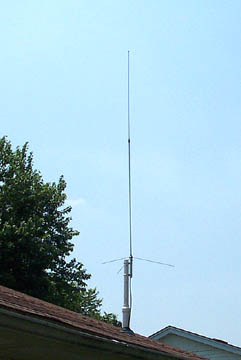 An inexpensive Diamond antenna is on the roof of the house:

The iGate works very nicely and ports a lot of traffic to aprs.fi. The addition of another cable or two between sound card and radio and a little software tweaking would give the station full digipeater capability. But we have several digis in the area and I don’t see a need to add another one. I don’t run the iGAte 24/7, just when I go flying and any other time the mood strikes, mostly weekends so the local airborne trackers can use the iGate. But supplying round-the-clock APRS support is just a matter of leaving the radio and computer running all the time.

The iGate would probably serve most of my APRS needs by itself within 100-150 miles of my home for enroute beacons. Not sure how far out it would receive my packets transmitted close to the ground, however. There are a couple of non-iGate digipeaters close by and my station ports a bunch of their transmissions to the net. The iGate is just my way of contributing to the local APRS network and was an interesting software exercise.

Update: Let’s face it, the software referenced above is not very intuitive to set up and has brought some hams to tears when trying to set up their iGate. In order to make the process a little easier, below are screen shots from my iGate rig: