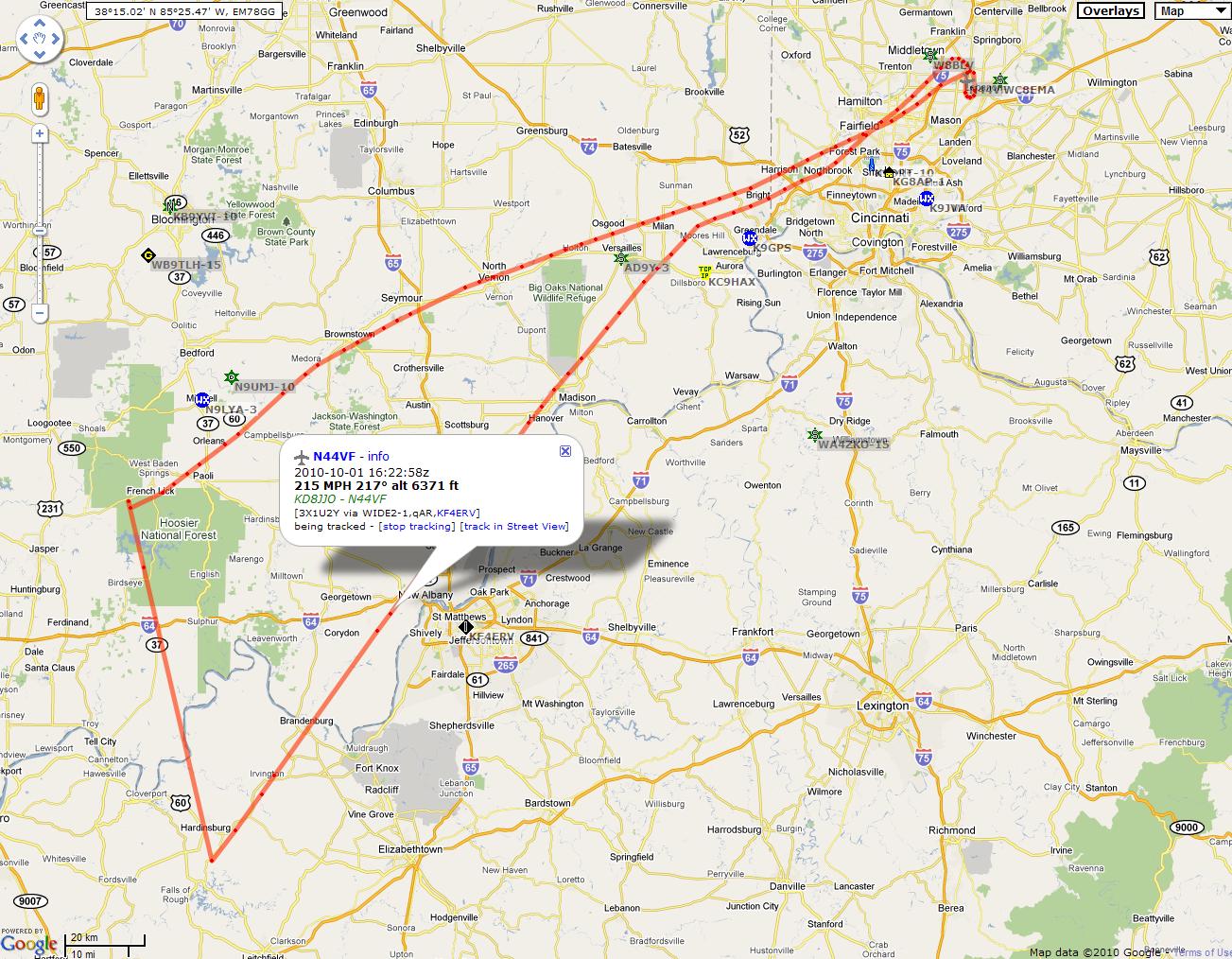 Wow. Rough River 2010 is now in the books. We had a great time, as usual, and made a bunch of new friends, as well as stress a bit about the weather and things, so let’s jump right into it.

Elizabeth and I took Friday off and rented a cabin at the park for both Friday and Saturday night. We are trying to reserve on each year, they are large and comfy (if not fancy) and allow us a warm (or cool, as the year might require) and soft place to get some Zzzs and a shower, and the occasional meal if the weather gets so poor we don’t want to walk to Fiddler’s or the lodge. Since the one we got was a 2 bed 2 bath with a full kitchen and family room, we offered to host some of our flying brethen to share, partly for their company and partly to induce more Velocitys to fly-in to the event! For various reasons a whole bunch of our friends could not attend, so we end up only having Don Burton (a Long Ez builder and pilot just out of his 40 hour test period), but we enjoyed his company.

Friday dawned bright and clear, or “Severe Clear” as some like to call it, with ceilings and visibility unlimited (CAVU) – absolutely perfect flying weather, aside from a freshening but not serious breeze. We were promised good weather with little chance of rain all weekend. We’d packed Thursday night, but there a few details to attend to at the airport so after breakfast we start loading up the Fox. We needed to add a bit of fuel since Rough River (2I3) doesn’t offer any, and in the hubbub I forget to bring my in cockpit camera mount. That’s a same because it was a pretty flight, getting airborn just before lunch time and contacting Cincinnati Approach as Middletown’s Hook Field passed under our wings. This really is the new, friendly tower as they immediately answered our call and cleared us into the Class B airspace, with just a bit of westerly diversion around the airspace required.

Once we were past Cincy we climbed up to 6,500′. The winds were much better up there, and the chop that was present at 3,500′ completely fell away. We were on course with the engine loping, an indicated 160 kts, but covering 185-190 gps groundspeed. This really is the way to fly. As our last trip to Rough River didn’t end well, we planned to cover airports enroute as cleanly as we could to minimize our chances of getting caught without a place to go in a pinch, and planned I68->MWO->HAO->I67->IMS->2I3. This route kept reasonably straight with at least some chance of gliding to an airport, the last leg being the worst at 85 nm/28:00 minutes between airports and out of any MOAs.

As we flew down the miles just ticked away, and the air was so clear we could see the landing traffic at Louisville miles out. We started to let down about 15 nm out, and we were still too close, with the tailwind and a moderate descent rate we still eating miles and needed to S turn to bled off some speed as we entered the pattern, number 3 for Rough River. Somebody on the radio called out “Is something going on a Rough River this weekend??” at the apparent traffic jam. Yes, yes there is, thanks for asking. It’s kind of a big deal.

Funny enough, as we rolled out on base Beth informed me she’d lost the airport. Aaallllright, let me skooch down in my seat….”hmmm…. I don’t see it either”. It was just gone. “Call it” and then her pleasant voice announcing we would be doing our first low pass of the weekend. As she turned “final” we did find the airport, hiding under some trees right about where it was supposed to have been. Naughty runway. So much the wiser, the green roofed buildings are in line of the numbers, just turn inside of the water tower, and presto, we’ve arrived at the Canard Fly-in.

We got the plane parked and unloaded, but couldn’t check in so we started reacquainting ourselves with old friends and making new ones. There was already a strong gathering, many folks arriving Wednesday night, and ended up with nearly 70 canards including 2 defiants, a quickie, a dragonfly, 6 Velocitys, and a bunch of Cozys, Long Ezs, and Vari Ezs. Quite a few folks elected to brave the chilly nights and camp on the field, and the annual chili and hot dog lunch under the big tent was well attended. Saturday morning was crisp and bright, with some gusty conditions, but several folks made their way out to the runway to do some low passes and formation fly-bys. By that time we’d been blocked in by a Long Ez (ramp space being so precious), but I wasn’t too keen on sending Beth out to give rides in the crosswind anyway.

Saturday evening featured the formal CSA presentations and awarding of door prizes, and technical presentation by Newsletter Editor Terry Schubert. Terry has a keen eye for improvement areas (something that has run amok on his own airplane and kept him from flying in), and he gave folk’s some things to think about and go home and try. Along the way we met some great new friends, including the aforementioned Don, but the Cozy building couple John and Christine Basol, Brent Bourgeois , Darrell and Nora Kufalk, Rhet and Ann, Al, Rich Schubert (thanks for loaner on the phone charger) among others. And of course we loved seeing our old friends Jerry and Linda Brainard, the Cozy Girrrls, Terry Schubert, Gary Hertzler, and Dave and Ali Nelson are just some.

Sunday dawned cold and drizzly, with low ceilings. It was clear we weren’t going anywhere for awhile so we packed up and called for a ride to the lodge for breakfast. We went ahead and dropped our gear in the plane so we’d be ready to leave at a moments notice. After enjoying the breakfast bar we checked out and updated our briefings. The weather was improving, but wasn’t good, though their were promises that Indiana was going to be passable, and that Cincinnati would probably be OK later in the afternoon. We hung around until the skies were reasonably open over Rough River and climbed aboard. The wind was still out of the north, so we had to taxi all of the way down the runway and would be launching uphill. I was hoping that we would get better performance than some of the Ezs we’d seen barely clawing their way off of the pavement, and was not disappointed. The Fox climbed well in the cool air and we circled for a quick low pass, then headed for Perry County Indiana for fuel.

We arrived to an airport totally devoid of life, but they did have fuel, and shortly several more planes out of Rough River arrived for fuel, including Berkut “Race 13” of James Redmond and Scott Carter’s 540 Cozy. After gassing up we took off for French Lick, then SER, OVO, and then back to I67. On this trip we got to talk to Evansville, Louisville, Indianapolis, and Cincinnati, so it was wonderful radio practice. Though we never were able to climb above 3,500′, so I was glad we’d selected a route with more airports. By 4 o’clock we were setting up for right traffic to 1 at Lebanon, fighting winds out of 310 at 11 kts gusting to 18. But at least it wasn’t so bumpy in the pattern! Beth did a great job of getting us to the runway, carrying a bit of extra speed for control, and with the wind blowing so hard stopping was no challenge at all.

All in all it was a great trip, we got tons of nice comments about our airplane, built some confidence in her as a cross-country machine as well as Beth’s ability to fly her, and had generally a very good time. I hope to see you all back there next year for the big 25th anniversary blow out! Look at the pictures in the gallery, and make plans now!