A funny thing happened on the way back from Columbus this weekend. Actually, it’s the sort of thing that’s only funny in retrospect, but anyway. We have onboard traffic, supplied by the FAA’s ADS-B program, and it’s pretty awesome. You get these little markers showing all of the airplanes around you, with the direction of travel, the height above or below your height, based on ground radar tracking information. Generally this works really, really well.

On the way home we saw this blip near a local airport. His direction of flight kept changing, but he was quite a bit below us. We were beginning our descent into our airport’s approach area, but I didn’t give it much thought. The next time I looked at the marker, though, he was above us. That was odd, but he was well above us, so I didn’t give it much thought, even though our tracks would take us in relatively close proximity…. The next return was the pucker moment though. He’s off the left wing, and at our altitude.

‘Look out your window…. do you see that guy’

Just as I said that, I saw that guy…. he was blasting straight up into a loop about a quarter mile off our left wing. Who knows where he was going to be on the downstroke…

One truth I learned from riding motorcycles is, you don’t need to worry about things you’re leaving rapidly behind you. It served me well more than once. It worked here, but we were pretty close to our airport at this point, and turning screws for 50 kts as the Navy would say… to the point where people at our airport noticed. We were asked on the ground if someone was chasing us…. “kind of, yes…” Ahem. We landed without event, with a new data point. The next time I see someone’s altitude varying, I’ll realize what they must be doing… Here’s what that sort of event looks like on radar…. 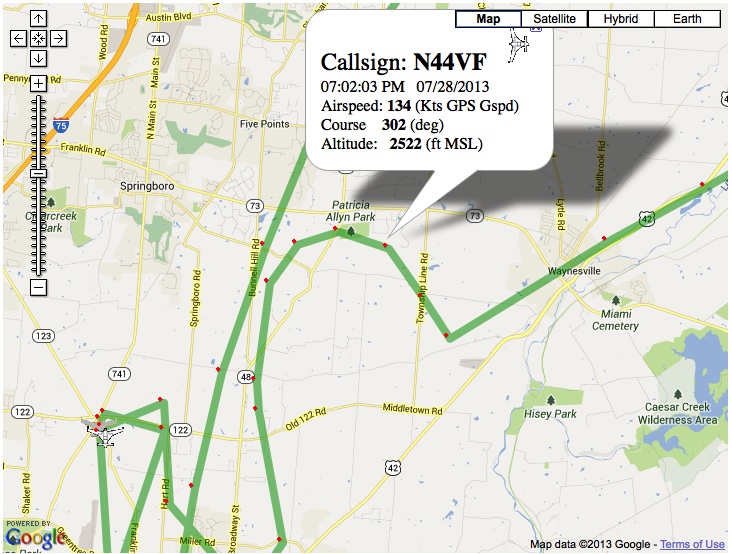