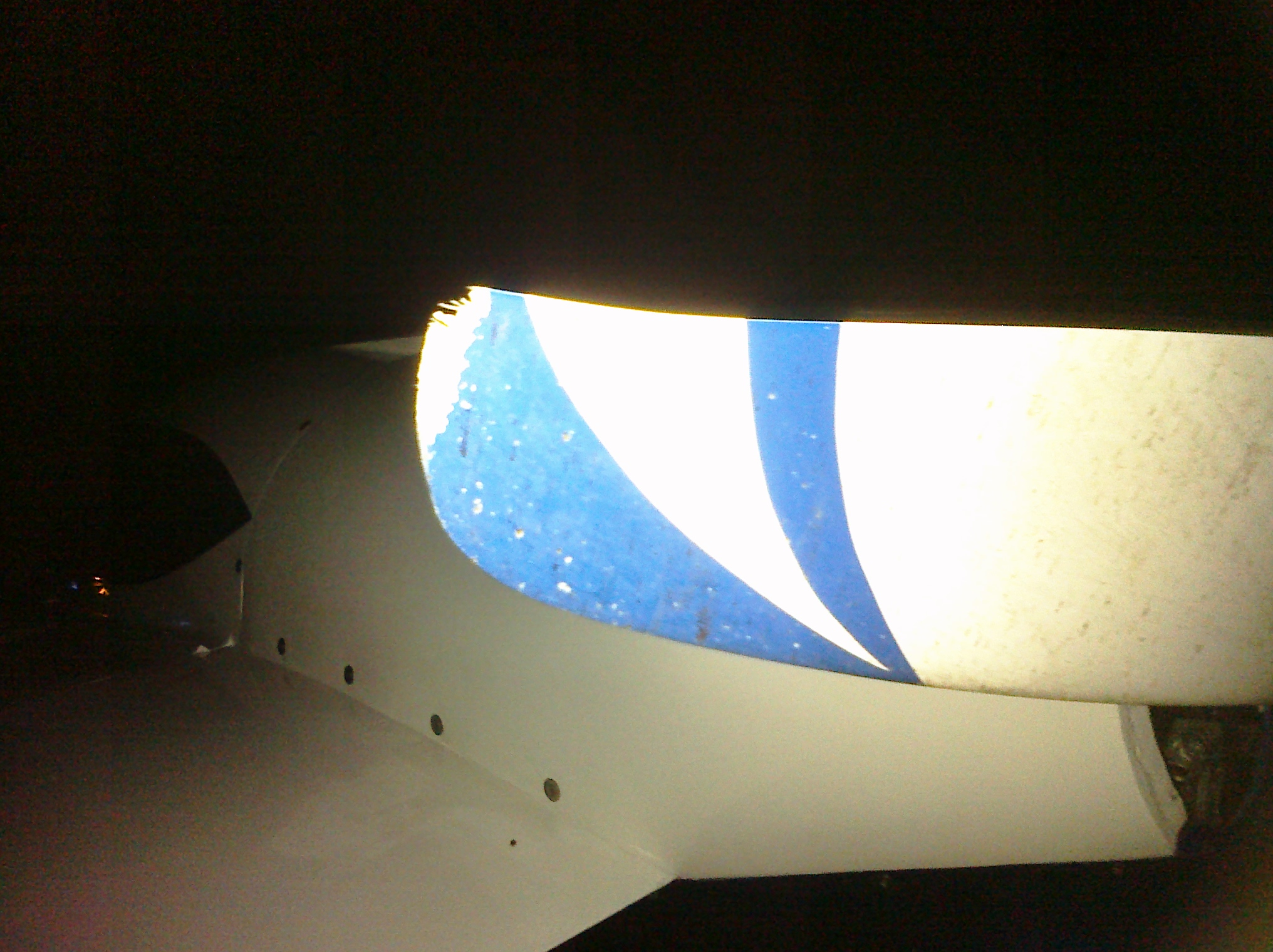 So, in my last entry I indicated that we’d cover landing in Piqua in a separate blog entry. That’s because I didn’t want our hard landing to spoil the trip report.

We put some hours on the plane at just over an hour up, about an hour and a half back, and nearly about an hour of rides at Allegan. We diverted to I17 to spend the night in Troy with Elizabeth’s parents, and we’ve landed there before. It was just getting dark, and although we’ve done some twilight landings this would be the first night recovery, and certainly the first away from home. It didn’t go well, to put it nicely. I’m sure Beth was tired from a full day of flying, and I think lights tricked her. About 30 feet up I glanced over at the airspeed and it was below 90 and dropping steadily with the speed brake out. By the time I called check your speed we were falling fast and plopped hard onto the numbers. A bunch of noise and the Fox was porpoising fore and aft, and the overhead beam shed my headset. When I looked up all I saw was the cornfield and I yelled ‘go go go’ loud enough to be heard without the headset on.

Beth slammed the throttle home and just like that we were back in the air. I’ve never been so happy to be flying. For a moment I was sure we were crashing, and now the Fox wax climbing at 120 knots. I wasn’t sure what equipment we still had with us, so on downwind we discussed controlling the airspeed and being ready for an ugly rollout. But she was fling fine, as though nothing had happened.

The next approach was flawless, settling in at a comfy 90 and rolling on at 85. She rolled out wonderfully, answering her brakes without comment. We taxied up and got out. Everything looked fine. Whew. Let everyone know we’re down safe.

Upon further review the main gear pants took some scuffing on the inside. That’s to be expected. When I looked at the down blade on the prop I saw the evidence of a strike. Hmmm. Just the one blade. Then I thought about Bill’s comments about hard landing and the nose pant. Sure enough, it’s MIA. The whole thing. I have to defod the runway, where I found it in 3 pieces. Morning inspection would reveal that it went under the nose wheel, gored the belly below Beth, and shot up against the pilot side strake and hit the very tip of the one blade.

I can’t say enough about Craig Catto getting right back to me on flying it home and repairing the damage. I checked the gear out, and it seemed no worse for the wear. We ran the engine to full power o. The ramp and checked for vibration after cleaning the prop up with my nail file. I cleared the plane to fly home. Beth wanted to fly home solo. She felt responsible for the damage and thought putting us both at risk flying home was unwise. I couldn’t argue that, but I wanted to be there to keep her calm. She assured me she’d be more calm knowing I was safe, so I agreed.

I watched her sunup and takeoff, and she agreed to climb over the airport and feel the plane out before heading south. I kept a radio with me so I could talk to her. Everything checked out so she headed south. I listened to talk to Dayton as long as I could and worried while I drove back to Lebanon. Needless to say, she did great and was soon enough back in the friendly confines of our hangar.

The Fox will be good as new shortly, though she got her hair mussed a bit. We also brought Andy’s prop home to try. I’ll be in Vegas all week, so Jerry will be doing the triage. We expect that she’ll be ready to fly to Cape May by the weekend, and I hope Beth will get in a comfort flight by then. We’ll see, and there’s always the weather, but I’m hopeful, and that would make this a fairly cheap lesson. If the airplane is moving stay vigilant, no landing is routine. My lady and my wife are troopers. Beth could’ve locked up and a bad situation could’ve gotten very ugly. She also could’ve easily decided she wasn’t up to flying the wounded Fox home. I’m a very lucky man.

3 responses to “A hard day’s night”