UPDATE 1: I’m posting the video now. I’ll probably time-compress the middle later, but I’m out of time for tonight. The cameras started crapping out at the end, and the voice gets slightly out of sync, but it’s basically all there. The ‘action’ starts at about 53 minutes.

Well, another Central States Association Rough River Canard Fly-in is in the books, and it was another exciting one for us. As much as I hate talking about having issues with the airplane, I feel like we need to as a service to the community, and it’ll explain why I didn’t really take any pictures or video of the event!

So, as is our custom, we planned to take Thursday and Friday off from work, and head down as soon as the weather would allow. The original forecast broke down, and we had generally not good weather, with some light showers late on Friday and even a little on Saturday, but Thursday was perfect. I had to take a morning meeting, but we were at the airport around lunch time ready to head south. So, we fueled up and launched for the ~hour flight.

And for about 45 minutes everything was going swimmingly. We’d flown directly across the Cincinnati class Bravo airspace at about 4,500′ MSL, and direct to the west of Louisville, talking and getting flight following the entire time, running about 175 ktas on the lean side of peak, 25 squared. Just as we got south of Louisville they cancelled our flight following, and about 5 minutes later, as we started our descent the engine started to surge and ‘kick’ a bit. 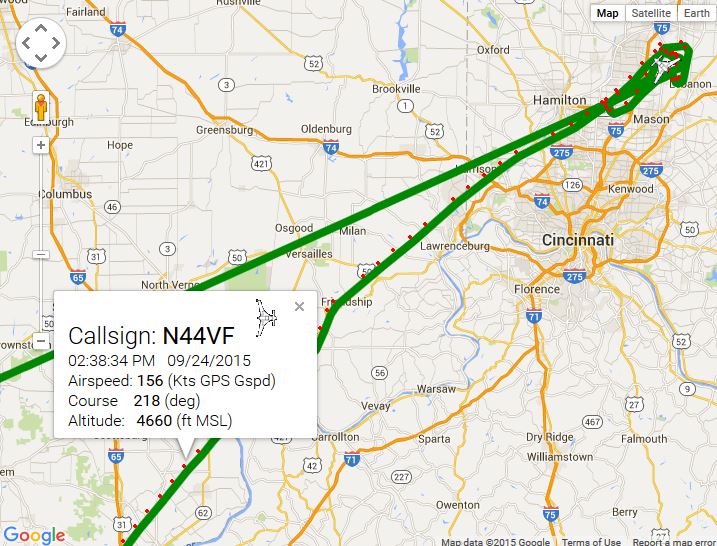 Unfortunately we had already started our descent, which masked the symptoms a bit. We didn’t like what we were feeling so we decided to hold altitude until we were a little closer to Rough River. This is when Elizabeth noticed that to hold altitude we were losing a little over 10 kias. We were slowly losing power. We decided to divert slightly off course to Breckenridge County Airport (I93, Hardinsburg, KY), which has a 4,000′ paved runway, and is about 12 miles due north of Rough River. While I was configuring the radios and getting the winds a update the engine started to sputter a bit, which is disconcerting, but it was generating enough power.

When we entered the pattern at Breck we were a bit high and fast – you don’t want to show up low and slow of course – and the engine seemed fine a flight idle. Maybe we were overreacting. We talked it over, and decided to try to climb up over Breck and, once at a safe altitude, make the quick run to Rough River. However, as we added power the engine got really rough. We’re landing. Now. We’re not going around, either. Elizabeth did a wonderful job of keeping some altitude and speed, but still getting us near the numbers so we could let the speed come off after we made the field.

Your first sense is relief, of course, safely down, on an airport (ahem). Close to our destination. However, as we’re rolling out, I notice something odd. There’s no airport at this airport. The runway is gorgeous, but there’s nothing higher than a sticker bush to be seen. No hangars. No FBO. No fuel. No bathroom, no power, nothing. There’s enough parking for about 8 airplanes, and 20 slot parking lot with an automatic gate at the fence, a beacon, and that’s it. Wow. O-K….

So, we take a quick stroll to the other end of the runway. Surely there’s something down there. I mean, this is the nicest, newest, 75′ wide concrete runway you’ve seen in your life. LED taxi lights, the best of everything. But no airport dog, no lineman, nothing. It was like a bad episode of the Outer Limits. So, we called the lodge at Rough River, and there happened to be some canard guys hanging about the front desk, and Nick and Fernando agreed to run the 15 miles over to get us and drop us at the park. Next we called about a rental car. I’m not sure what comes next, but I’m sure it involves running back and forth between the park and Breck several times. It’s about 3 o’clock, so it’s good that we got an early start.

By the time we find someone locally that rents cars it’s going to be closing time. We got a hold of Blake at Enterprise in Leitchfield, KY, and he was soooo, so kind as to stay open late, come and pick us up at the lodge, and drive us back to get our car. But, that’s like 40 minutes away, so by the time we’ve got the car it’s past dinnertime, and I’d made an ugly decision. As my buddy Andy says, don’t get mad, fix it. I know how to do this, I just need to bite the bullet. We’re driving the 3:30 hours back to Cincinnati to get tools.

We arrived at the house about midnight, but I still need to run to the hangar. I collected everything I think I might need to work on the engine. Hoppe’s #9 gun cleaner and ultrasonic jewelry cleaner for the injectors, torch and gapper for the plugs, extra spark plugs and coil, rackets, wrenches, and screw drivers, torque wrenches, step stools, drill driver, anti-seize, locktite, generator and fuel, extension cords, the list goes on and on. I’m going to need compressed air, so I’m going to need to pick up a portable unit. I got to bed after 1 am.

By 8 am I was back up and driving south to work on the airplane. We sent out a request to all of our friends that we knew were already in the area to gather the brain trust to diagnose and fix the problem. That’s when Rene diverted to I93 before we returned, but also came back after I was on scene again. He was great company, and got my generator running (he spent a summer as a small engine mechanic in school-he is the most interesting man in the world, after all), and helped me look everything over. I flow-tested the injectors into baby food jars, and they looked pretty even, but we cleaned them anyway. The plugs similarly looked acceptable, but they were a little dirty, particularly on the bottom where they appeared a little wet. They were also cleaned and reinstalled, as was the fuel servo screen. Next I checked the connections on the coils, plugs, and entire ignition system, then checked the induction tubes and intake hose, throttle valve, and general air side. That covered everything that was really reasonably doable with the lack of facilities, but at that point it was raining on us, which was sucking my soul so we called it a night.

That evening we sat in the lodge restaurant over a beer to recap what we had done, what we thought every nuance of the flight told us about the problem, and the useful next steps. We agreed that my maintenance likely fixed the issue, and that putting it back together and running it extensively on the ground the next morning made sense. If all seemed nominal we’d test fly it, and then decide if we were continuing to Rough River, or back to our home base. As it happens the weather made the decision for us as Saturday dawned to overcast skies, the occasional drizzle, and moderate winds. The forecast was no improvement either Saturday or Sunday, with the winds continuing to build. If we were going to head out, this was as good a time as any.

Elizabeth and I had a hard conversation about who was most qualified to fly the test flight, and whether it should be a solo flight or not. My flying is slightly more precise than hers, but she has many more hours, with a lot of those being stressful test flights. She’d already successfully completed 1 emergency landing, and a couple of precautionary ones, so he was probably best qualified, and she insisted she do it.

However, I’m much better with systems, particularly the on-board computers, and I didn’t want her to have to manage the flight plan and engine data, with possible diversions, while flying the airplane in really not great weather. I ran the engine for over 30 minutes, making sure to heat soak everything in the cowling in case it would have an effect, and made 4 high-speed runs down the runway to rotation speed to make sure the engine was generating power and not hiccuping. Everything seemed to be in order.

To get serious for just a moment… you really can’t ask your friends to hop into your airplane, which might have an engine problem, and fly with someone they’ve never flown with before, over rough terrain, and in marginal weather. Luckily, I didn’t have to. Tim Nelson volunteered, and even seemed somewhat pleased to do it. Tim has over 1,000 hours in his Velocity, and more canard time in is VariEze. Bob Bittner agreed to fly chase and bring Dave back, and I would be left to return the rental, pack my tools and clothes, and say our goodbyes. After all, it was Elizabeth’s birthday, and she wanted me home to spend it with her, as much as was possible. We took some pictures, kissed, and she was off. (more description below pictures)

Shortly after takeoff Rene basted into the area in his Legend, followed them around the airport twice – she was checking the engine instruments – and then she departed the area for home while Rene landed with James Ealey, who agreed to help me return my rental. It is humbling to have so many wonderful people willing to set their time aside to help you. I really can’t do it justice, but these four guys are rock stars to us, and we owe them a large debt for their assistance.

The flight home was pretty smooth, with a good overcast layer, and Elizabeth got to share with Bob what the intermittent showers they were flying through looked like on ADS-B (light green, green, yellow, etc.) with Bob, who was a good sport flying through it as he’d planned to make a fuel stop. Tim sent me periodic text messages with their progress so I wouldn’t worry too much, and in an hour they were home. The only thing left was for me to clean up the mess and get on the road. I was home a little after dinnertime to celebrate Elizabeth’s birthday.

You never want to have a problem with your airplane, but if you’re going to, this turned out about as well as can be expected or even hoped for. As I talked with folks around the Rough River, nearly everyone had a story of a time where something like this happened to them. I think that’s important to note for the current builders. Do a good job, be conscientious, and it’ll be a long good flying companion, but it would be stretch to hope for trouble-free. But if you’re building an airplane, you’re probably a self-starting and motivated person, and you can overcome. It wasn’t the Rough River I would’ve wished for, but it will be a special one to us in so many ways. And, to steal a line, thanks again for all the fish everybody.