The pilot reported that while descending in preparation for landing, he noticed an unusual sound from the engine and noted a loss of oil pressure, followed by a loud thud, a vibration, and a total loss of engine power. A forced landing was made to an open field. After the aircraft came to a stop and the pilot and passenger exited the aircraft, smoke and fire was noted coming from the engine area. Attempts to extinguish the fire were unsuccessful. The aircraft was consumed by the fire and destroyed. A witness reported observing the aircraft fly over his location when he heard a loud bang and debris was seen falling from the aircraft. Later, two propeller blades and the lower engine cowl were located in fields near the witnesses location. Examination of the cowling revealed heat distress near the right side, starting at the opening for the exhaust stack and emanating aft. An unusual amount of oil was noted on the inside of the cowling and a thin coat of oil was noted on the outside. The two propeller blades were also coated with a thin layer of oil. During the engine examination, it was found that the exhaust system was cracked at the welds at both exhaust outlets with the left side exhaust outlet missing just aft of the number six cylinder riser. Further inspection of the exhaust riser identified two additional cracks. No other mechanical failures or malfunctions were noted during the engine examination. 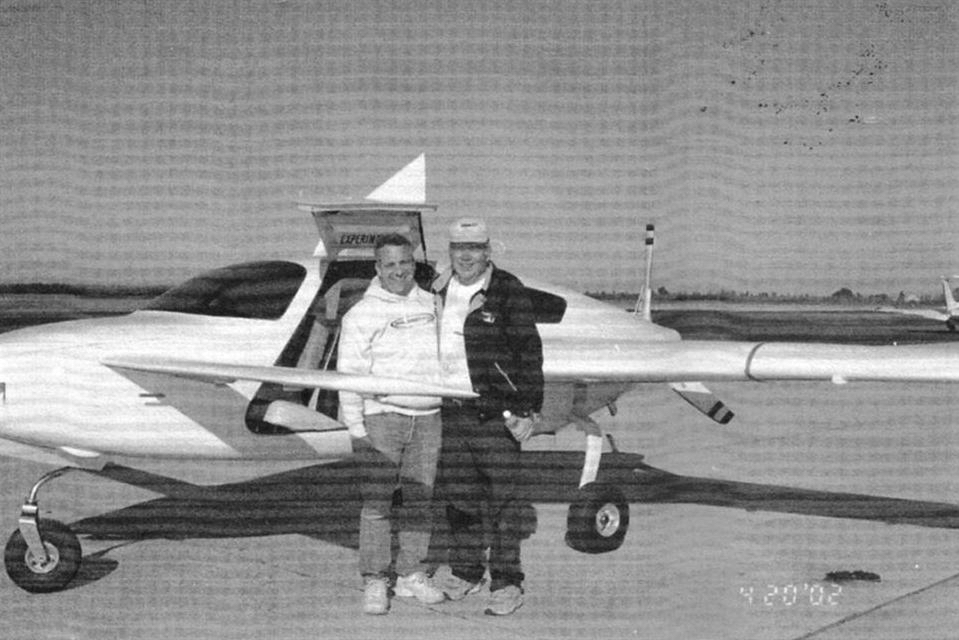 I am not sure quite how to update and enlighten everyone on the loss of my airplane. As far as I am aware, the investigation has concluded and no one could give a definite explanation of the entire incident. Many theories, but they don’t collectively solve or explain every condition which was experienced and evidenced.

So let me start with the flight in a chronological order of events… (all times, in seconds, approximate (some aspects seem longer, some shorter))

00:00 Loss of oil pressure warning
00:10 increase in engine noise
00:20 increase in engine noise again, with ticking sound and slight vibration
00:30 BANG, followed by no engine power and vibration (although never severe) and visual notice that something was wrong with the starboard winglet
00:45 Loss of electrical, (fluid on windshield, I think the battery overloaded)
01:00 Landing in harvested corn field
01:03 airplane shifts to the right and the nose falls to ground for remainder of rollout
01:08 Passenger and Pilot get out to find aft two thirds of cowl on fire
01:13 8# ABC extinguisher exhausted, fire reignites/spreads (I obviously did not get the source or it lit back up I have since learned that oil does ignite and burns very very hot)
02:00 with all gear retrieved, we resigned to a safe distance (went back twice to try to find the cell phone)

After accident facts.
Two prop blades were found approx. 2 miles away along flightpath

Lower cowl was found 2 1/4 miles away along flightpath, saturated with oil and burnt aft 2/3rds starting from exhaust exit hole with one piece missing (a bubble for starter/alternator clearance) and half the screws pulled through and the entire mounting flange from the wing (very strange)

Nothing in the engine teardown showed any problem, (oil still on main bearing and prop hub, no sign of failure of critical components)

I and others had inspected the exhaust system, 1 hour of flying time prior to the accident

I had filled up to 70 gallons in Apple Valley that morning and had about just under 10 quarts. I was about 5 to 10 minutes from home, 2 minutes from the next airport at 20 to 25 hundred feet. There were over 100 911 calls from observers of an aircraft on fire from the last city I flew over, I landed just north of it.

Weather was not a factor. The flight consisted of me flying at 24″ and 2400 RPM at 100 rich of peak burning about 17 gal/hr. 32 hour TT. Describing vibration is like explaining the definition of turbulence. In my opinion, I would say there was never any excessive vibration (although I really have nothing to compare it to other than driving a diesel my entire life), but a noticeable vibration after the bang. I guess I could use a scale, 0 being normal and 10 being driving over a cobble stone road….. thus, 0 while flying 2 just before the bang, then a 6 for a bit, I guess, and then to 0 by my final. (I guess this makes sense….)

Theories:
I have changed my mind about posting here, maybe someone could convince me of otherwise… I see undue criticism and debate rather than positive discussion occurring. The NTSB will eventually fill this in. They are the experts.

I know reflecorites will develop their own ‘opinion’ as to what happened, and nothing I am going to say will sway them.

What would I do differently, not that it is obtainable or recommended, but possibly worth considering:

1 change all fittings to steel, I was never aware at how low of a temperature aluminum melts.
2 change all lines to either hard SS line or stainless steel braided with two forms of heat protection- firesleeve is not enough.
3 route all lines and firesleeved electrical to the center of the firewall as far away from exhaust direction as possible, which means not using the conduits at the firewall
4 CABLE exhaust to engine, engine mount, and firewall, and anywhere else you can affix it
5 I would not use the same exhaust system, I liked the short stacks idea as proposed by Don White. There has been a lot of discussion about those pipes, and the ‘experts’ I have been dealing with recently have introduced concerns…. of course now they tell me
6 If I were to keep the exhaust
a) grind and polish the slag off from the inside of the exhaust
b) cut off the exterior portion of the exhaust flush with the cowl, yes I trimmed mine quite short, but someone stated I had too much out there so, flush would be the only solution. (not that I buy this, but it was said, thus…..)
c) enlarge the exhaust exit hole in the cowl
d) how do I write this…. but, well maybe not run high compression…. (this goes off of a comment and discussion when the exhaust was investigated)
7 when the fire department shows up, make them put it out.
8 seek therapy immediately after this type on incident, the loss has taken a lot more then I ever dreamed
9 apologize to those flying or to be flying for being associated with hurting the statistic for experimentals
10 cherished every second I had more, as I know of no other airplane which flies as well
11 not spent as much time getting it ‘perfect’ with additional items, I would have gotten it flying then made improvements. although I was very proud of my no visible screw RBH and cover, and my NACA fresh air inlet in the door and storage area fed into the carbon beam. (desperate attempt at justification, I guess I should go talk to that therapist)

Well this is all I can take at this time, I think this should cover most of it maybe too much so, but hopefully someone can gain/prevent from my loss

Release the hounds…. I will stay on the reflector for at least a while longer to answer questions.