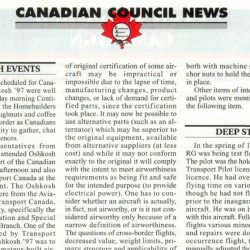 Repint of the October 1997 edtion of Kitplanes on N97XL, and the launch of the XL airframe. Download

The aircraft was in cruise when the pilot said the engine began surging. He attempted to rectify the problem by adjusting mixture, magnetos, and the secondary electric fuel pump, without success. As the pilot was looking for a precautionary landing area, the engine quit. The airplane crashed into some small scrub oaks during the forced […]

The pilot flew a 15 minute local flight with a passenger in his homebuilt airplane, and returned to land at the departure airport. He entered a left downwind for runway 24, lowered the landing gear, and extended the speed brakes when he turned final. About 50 feet above the ground when he began to ’round […]

While cruising at 4,000 feet during a personal flight, the pilot reported to the air traffic controller that he was about 10 miles from the airport, was experiencing an engine problem, and was declaring an emergency. About 1 minute later, he stated that he had a ‘fire on board.’ The pilot made a forced landing […]